From New Zealand, Dr. Vredeveldt moved on to the United Kingdom to take up a Ph.D. position with Prof. Alan Baddeley and Prof. Graham Hitch at the University of York. During her Ph.D., she received a Fulbright Visiting Scholarship to go on a three-month research visit to John Jay College of Criminal Justice in New York, where she worked with Prof. Steve Penrod. Dr. Vredeveldt carried out six experiments on the effects of eye-closure on eyewitness memory and defended her thesis in 2011. The intellectual and practical contributions of her Ph.D. research were recognized in thesis awards from the British Psychological Society – Social Psychology Section and the American Psychology-Law Society.

After obtaining her Ph.D., Dr. Vredeveldt took up a postdoctoral position at the University of Cape Town in South Africa, where she worked with Prof. Colin Tredoux. One of the research projects she carried out there was a field study with the South African police, which was funded by the High-Value Detainee Interrogation Group in the United States. She collaborated with police interviewers to investigate the effectiveness of the Eye-Closure Interview with real witnesses of serious crimes.

In 2013, Dr. Vredeveldt moved back to The Netherlands to take up a prestigious Branco Weiss Fellowship from Society in Science in Switzerland. She started working as an Assistant Professor at the Department of Criminal Law and Criminology at VU Amsterdam, collaborating with Prof. Peter van Koppen. During her five-year Fellowship, Dr. Vredeveldt  investigated under what circumstances discussion between witnesses may help them remember more, or more accurately. 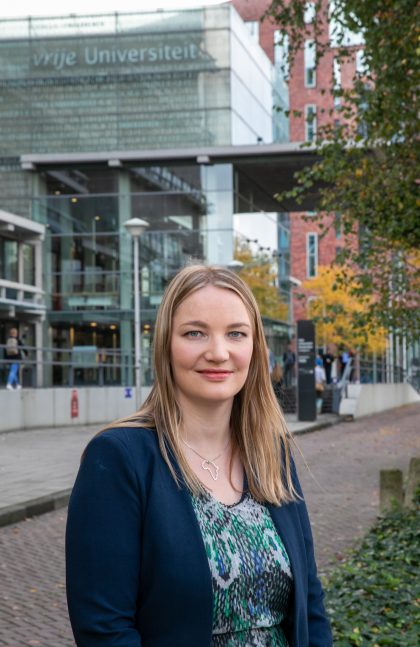 Dr. Vredeveldt is currently an Associate Professor at the Department of Criminal Law and Criminology at VU Amsterdam, where she co-founded the Amsterdam Laboratory for Legal Psychology (ALLP). She heads a research team consisting of two postdocs and two Ph.D. students, funded by an ERC Starting Grant from the European Research Council. The team investigates eyewitness testimony in cross-cultural contexts. In addition, Dr. Vredeveldt is course coordinator of Project Reasonable Doubt, in which students investigate the evidence in potentially dubious criminal convictions. She also leads the course Psychology in the multidisciplinary international Bachelor’s programme Law in Society at the VU. She regularly appears as an expert witness in criminal cases, is a member of the Netherlands Expert Committee for Equivocal Sexual Abuse Allegations, and serves on advisory committees of the Netherlands Register of Court Experts. She is Associate Editor of Applied Cognitive Psychology.

Her work has been featured in international outlets such as The Wall Street Journal, Psychology Today and Life Hacker, and in Dutch news outlets such as De Volkskrant, Algemeen Dagblad, De Telegraaf, NOS and Elsevier.

This website uses cookies to improve your experience while you navigate through the website. Out of these, the cookies that are categorized as necessary are stored on your browser as they are essential for the working of basic functionalities of the website. We also use third-party cookies that help us analyze and understand how you use this website. These cookies will be stored in your browser only with your consent. You also have the option to opt-out of these cookies. But opting out of some of these cookies may affect your browsing experience.
Necessary Always Enabled
Necessary cookies are absolutely essential for the website to function properly. This category only includes cookies that ensures basic functionalities and security features of the website. These cookies do not store any personal information.
Non-necessary
Any cookies that may not be particularly necessary for the website to function and is used specifically to collect user personal data via analytics, ads, other embedded contents are termed as non-necessary cookies. It is mandatory to procure user consent prior to running these cookies on your website.
SAVE & ACCEPT